Estimated reading time: 4 minutes Using data and technology for good to save lives

Using data and technology for good to save lives

In 2015, 171 child deaths in Texas were caused by child abuse.  That is 3.3 children a week. In total there were 274,448 alleged child abuse victims last year.  To put it in context, that is the Dallas Cowboys’ AT&T Stadium at full capacity, three times over, and then some. Government resources such as CPS (Child Protective Services) are overloaded and many children tragically fall through the cracks. It’s a fact that diverting funds to the areas that need it the most is imperative in fighting child abuse.

Epsilon and Alliance Data are committed to using data and technology for good and we’re excited to share the news.  This week the ZipRisk Map was unveiled and is a product of collaboration between Epsilon, Alliance Data, graduate students from the UT Dallas School of Engineering and Computer Sciences and TexProtects, the Texas Association for the Protection of Children.  For a video explanation of the ZipRisk project, click here.

This new geo-mapping tool is a groundbreaking, interactive data map that provides researchers, advocates, legislators, state agencies and other non-profit providers’ evidence to commit resources by identifying the highest-risk areas in the fight to prevent and end child abuse. The ZipRisk Map is accessible at http://www.TexProtects.org/map.

Students at UT Dallas worked with data technology specialists at Epsilon to create the data model that empowers the ZipRisk Map.  The variables analyzed are common contributors associated with child maltreatment such as past child maltreatment, past child abuse and neglect, teen birth, poverty and substance abuse.  This data was mapped out at zip code level so that you can zoom in on a specific neighborhood, look at a county or view the state as a whole to see the big picture of demonstrated need for child abuse and neglect prevention.

The same technology we develop to target ideal customers for our clients can also be used to target at risk environments for child endangerment.  Every day we leverage data and technology to deliver relevant customer marketing.  We enable our clients to know how many products were sold, to whom, when, where and correlate factors such as household income, weather, competition and inventory.  In the non-profit arena such knowledge can literally save lives.  The alignment of skills, expertise and demand between UTD, Epsilon, Alliance Data and TexProtects in targeting potential abuse was the compelling dynamic that resulted in the creation of the ZipRisk Map.

The UTD students had many options in selecting their senior project and chose this project over other contenders from world-class brands looking for development talent…even NASA competed for their talent.  The students in general agreed that they would have never have known that their skills and knowledge could be used to effect change in child abuse prevention. 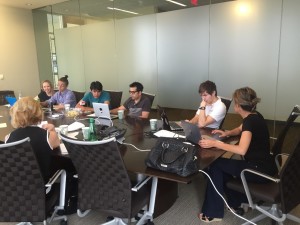 Special appreciation to our colleagues at Epsilon including Kishore Dandu and Venkat Aedavelli for their mentoring and to our Alliance Data family for providing the opportunity to contribute to the prevention of child abuse.

I’ll leave you with this - on average TODAY in Texas 185 children will be victims of abuse.

TexProtects, The Texas Association for the Protection of Children, was created to tackle issues of Child Protective Services (CPS) reform, prevention and public awareness.  For more information on TexProtects: www.texprotects.org.

To learn more about How Big Data is Helping in the Fight Against Child Abuse read more from Danielle Ricketts, Corporate Affairs Specialist, Alliance Data.

A privacy partner you can trust: CCPA and beyond

The power of data: uniting spend and donating behavior to understand customers

Our sites are in transition, as we combine the capabilities and offerings of Epsilon and its Conversant platform into one powerhouse.